It’s become painfully obvious to me recently that developers tend to be really, really bad at setting up a decent build environment. Xcode is shonky at the best of times, but it certainly doesn’t help if you let carelessness or ignorance lead to complexity creep. Eventually, you’ll end up with a project requiring 10 different build scripts, all with their own sets of assumptions and dependencies (such as ruby, brew, pod, perl versions).

Jenkins is shit. No really, it’s actually really rather terrible. When you think about it, it’s basically just a pretty (well ok, it’s not pretty by anyone’s definition) interface over cron. For the purposes of continuous integration, there’s pretty much nothing Jenkins gives you that you couldn’t achieve with a cron job, a decent build script in your repository and a disciplined filing system.

Maybe that’s a bit harsh, but from my personal experiences from it, most of the things it’s good at is solving problems that it’s responsible for creating in the first place. Your net gain from using Jenkins is damn-near close to zero, but you inherit a massive amount of maintainence burden.

It’s a prime example of what I was talking about a couple of days ago:

If your software isn’t at least as nice to use as the proprietary stuff, why do you even bother? You shouldn’t just settle for mediocrity and hope that because you’re open source you’ll get a decent userbase of digital hipsters.

I stand by that statement, especially in the face of the horror that is Jenkins. Rather than focus on building something delightful that’s really useful to a whole bunch of people, they’ve instead focused on building a “one size fits all” solution to build servers that actually serves no unique practical purpose whatsoever. It’s like they focused on being Enterprise FizzBuzz compliant at the expense of actually doing anything useful.

The situation with building for Xcode using Jenkins is pretty miserable. There is an Xcode plugin for Jenkins but they’re very clearly not up to the task of keeping it up to date with the constantly evolving Xcode. This is not something you use if you want reliability, no sir, you use build scripts!

Build scripts in Jenkins are a pretty fragile thing. The gist of it is, you’ll be invoking xcodebuild at some stage, but before and after that there’ll be a heap of codesigning hell. To top it all off, even if you manage to get the thing to produce the correct IPA, Jenkins provides no functionality to host the IPA for iOS clients to download.

After many days of research, and a hell of a lot of trial-and-error, eventually we managed to MacGuyver a solution where all the moving parts worked together – only to have everything fall apart when we had to revoke our distribution certificate.

So, since our build server was fucked anyway, why not try something new and shiny?

First off, Xcode Server is horribly buggy. The amount of outstanding bugs in this thing is absolutely horrifying. Even some of the most basic things are completely broken:

That’s a lot of problems. The biggest advantage it has is that it’s not an external third-party solution; it’s integrated right into the Apple ecosystem so you have something of a guarantee that it’ll continue working with Xcode updates. It has very few configuration options (a huge plus in my book), seeming to focus on convention-over-configuration. This means you’ve got to setup your project in a way that makes the Xcode Server happy. This is not always easy, but if you get it right, Xcode Server will be able to build your application on-demand, on a schedule and you’ll have something of a guarantee that your app is as simple to compile as:

Optimise Your Environment For Maximum Non-Suckery

One of your first aims here should be to absolutely reduce the amount of special configuration that is required to compile your project. Configuration includes things like:

You’d be surprised how much you can do by staying within the confines of the standard Xcode project settings. There’s almost always a way to do what you’re trying to do with custom build scripts or Makefiles using just build configurations, targets and schemes.

The build process should only ever modify build products, not source files! A particularly notorious example of this is modifying your Info.plist file before building. Please don’t ever do this! Modifying the Info.plist is pretty common for inserting build-related information such as the git commit, build date and so on for debugging purposes. You could even do this to switch out the bundle ID so you can have development, staging and production versions of your app on a device at the same time. In this particular case, the correct thing to do is to edit the Info.plist in the .app file after it’s produced, but before codesigning happens. A very good example of this can be found here. If you need to change your bundle identifier, typically what I do is:

Anything that gets modified as part of the build process should be considered a build product, and all build products should be in your .gitignore file (or similar, if you’re still using legacy version control systems). The ideal scenario is this:

If you managed to get your terminal into this state, congratulations! You’re one step closer to having an un-fucked build environment!

Everything Needed For Build Belongs In Version Control

This is the point that will perhaps be the most controversial. Xcode Server has a bug as of the released version of OS X Mavericks Server, where if something modifies the .xcworkspace or .xcodeproj during the build process, the build will immediately fail. This is a huge problem if you use something like CocoaPods. The typical attempt at trying to get CocoaPods to work with Xcode Server usually involves creating some pre-build script that invokes pod install. Sounds great in theory, except that pod install modifies the .xcworkspace, .xcodeproj and the related Pods.xcodeproj, causing Xcode Server to chuck a tantrum of biblical proportions. In light of this, I propose we commit the ultimate heresy: We should commit the Pods folder to git.

Now – please, put those pitchforks away – I realise that this means throwing a huge amount of data into your git repository, and it kinda flies in the face of the spirit of CocoaPods as a dependency manager, but hear me out. The problem with not having the Pods folder in version control is that you’re relying on some external state (the CocoaPods spec repo and all your dependencies’ repos) to properly build your app. If one of your dependencies updates their .podspec to support a newer version of CocoaPods but breaks compatibility with your build server’s version of CocoaPods, then your app will fail to build; through no fault of your own. When you think about it, there’s quite a lot of beauty in checking in your Pods folder to version control:

The Pods folder these days is almost exclusively source files anyway, the exception being Pods that provide graphics and the like. Git is pretty darn good at dealing with large amounts of source files, it’s when you’ve got large binaries that things get hairy. Some dependencies (I’m glaring right at you TestFlight, Google Analytics, Crashlytics, etc) simply provide you a binary blob as a dependency. Unfortunately, in this case, just commit it to git and hope for the best. They’re not that massive, and as long as you don’t update them too often it shouldn’t be much of an issue.

An added bonus is it means Xcode Server will work! It also greatly simplifies getting newbies set up in your project. Getting a new hire up to speed on the intricacies of CocoaPods has always been the biggest stumbling block for us in getting someone set up. Being able to simply clone the repo, open the .xcworkspace and press build has an implicit value that’s really hard to quantify, but you’ll know it when you see it.

Lastly, if in Jenkins you had some post-build actions, it’s still possible to do this with Xcode Server as well. What you need is Archive Post-actions in the Scheme editor. A good strategy is to create a special Scheme for each of your Bots, and configure special Post-actions that’ll run after the archive has finished on the server. 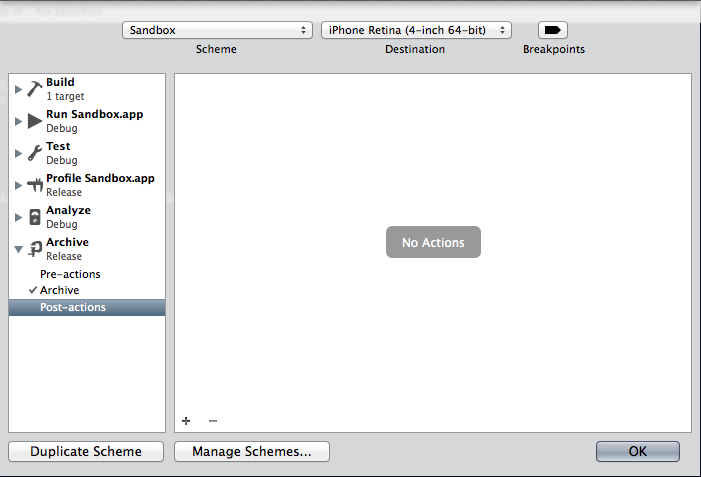 Then, archive your app and check out the contents of /tmp/env. Some interesting ones:

This lets you do some really interesting things after an archive has finished, such as automatically re-signing the app, creating an IPA with embedded .mobileprovision, upload to TestFlight…

Keep in mind, on the build server this script will execute as the Server’s _teamsserver user, which doesn’t have a home folder, let alone a desktop environment. This means if you’re doing funky stuff, such as with SSH or the keychain, you’ll need to be wary of the constraints. This can get really complicated so I might dedicate an entire post to this topic in the future.

This Octopress Thingy Prev Binary Plists in Sublime Text 3 Next